United in Marriage, United in Water

Couple of months ago, I had went to Nareshwar, the place known for Saint Rang Avadhoot near the banks of River Narmada.

All people go, nothing extraordinary!

Before going to the ashram, we thought to have a good look at the river. Just about time as we reached the river, the boatman was getting ready to leave with the tourists to the other side of the riverbank. My parents immediately jumped on the boat to my surprise and called me in. 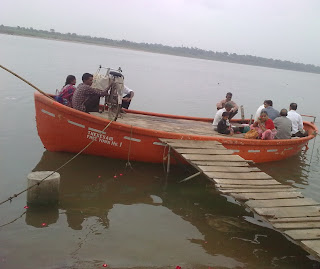 As we went to the other side and waited for more passengers to come back to our shore again, I noticed a picture of a newly wedded couple floating in the river. I thought it was funny that people even resorted to flinging their picture with their spouse like this. Maybe a marriage that ended in divorce or an extra picture that came out of a bag unnoticed. I showed it to my mother. She immediately asked me to pray for them.

As I got the wind of the situation, I kept quiet! Later on the way, she told me that most probably, it was a picture of a couple who had died together suddenly after marriage due to some reason and it was a custom for their family to bid them goodbye like this.

This was unusual for me!

How Karma brings people together all of a sudden and then let them go in one instant.

Posted by Kuldip at 8:42 PM No comments:

Though it seems, going by our standards of living and our negligence and utter ignorance of environment, I don't think that we will be able to last until that time. But nevertheless by some miracle, if we last and technology takes the lead, how will be our life?

How about your WiFi controlling every electronic item in the house?
How about your furniture shifting its shape according to your needs and desires?

How about using recycled water? I mean your waste goes for recycling and comes back to you for washing and drinking. Yuck! Wouldn't need that facility!

These guys have thought and pictured some really cool visualizations about how life will be in the year 2030. Check it out.

Posted by Kuldip at 7:54 PM No comments:

The last week has seen a lot of action in the country. Nobody expected the Indian P.M to suddenly throw a big surprise and a shock on the national T.V that Rs. 500 and 1,000 notes will not be in power anymore and new notes will come in existence.

The common man who does not understand the nitty grittys of the economy was more concerned about getting the possible required liquidity for their home expenses. Most of them accepted the fact that there must be something better in doing this. Of course people were/are little disturbed standing in long lines.

In spite of the P.M's assurance that petrol pumps and hospitals would cooperate with the banned notes, some of them are not doing the same, specially the hospitals. How Inhuman! At the same time, there are examples of hospitals giving the treatment for free to people who do not have the required cash.

The hoarders immediately started throwing the money in fear of the raid. Crores thrown in the river Ganga, bags and bags of currency money thrown in the garbage dumps, and more!

Media immediately started doing its job. Projecting the news as it is and creating news as they thought. ( A newspaper reported that an elderly man passed away standing long hours in the line on the front pages, but later withdrew the statement and apologized with a small note in one of their interior pages that one can hardly catch a glance on.)


And politicians? We all know what happened. Some U.P bigwig ministers immediately opposed the move. The famous muffler C.M as always put the blame on the P.M. I wonder if he even eats without remembering the P.M. The Congress Prince thought he could mingle with the public by standing in the line and withdrawing Rs.4000. Really! He has the need to withdraw this small amount of money? Not to mention that it was reported he didn't even knew how to use the ATM and had to ask the security guard to guide him! The guard even knows his Pin Number now!

Let's see how the effect goes in the coming time period. for now, the common man supports the P.M.

Posted by Kuldip at 7:59 PM No comments:

Kuldip
Vadodara, Gujarat, India
I am a happy go lucky man, done with my graduation,living happily in Vadodara, and doing a wonderful job. I often come across unique travel experiences, worth sharing.